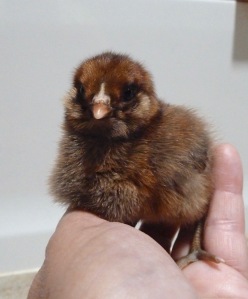 On July 17th, my new babies arrived. There are four of them. These photos were taken three days later. Two of them are Cuckoo Maran (top left), the other two are Easter Eggers which are Ameraucanas crossed with just about any other breed which is why the chicks look different. Easter Eggers can produce eggs in a range of colors (one color per bird).  The one thing these two chicks have in common is that it appears they’ll have cheek tufts.  The chicks started out in the bathtub, but after two weeks, they were already showing some flight capabilities.

As planned at that point, we moved them out to the brooder in the garage. I had modified the brooder to give it a couple of windows so the chicks could see outside when the garage door was open. We were admiring the little girls when Sara (good friend and chicken fan) noticed a visitor outside the garage door.

The rat snake was moving by, so I attempted to encourage it. Unfortunately, instead of fleeing away, it turned and fled for the garage. Of course I couldn’t leave it in there with the baby chickens, so I put on my gloves and tried to pull it out from between two bags of concrete. You might be surprised at how much strength a constrictor can bring to bear if it doesn’t want to be moved. Sara had to move one of the concrete bags to break it’s hold. You’ll be happy to know that no snake, chicken or human was hurt in the incident. I released the snake a couple of hundred yards from the house, then proceeded to pile heavy weights on the lid of the brooder 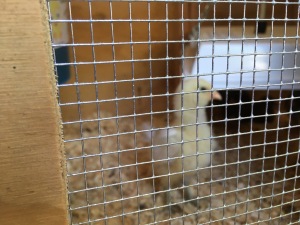 So far, we’ve had no further snake sightings near the brooder and the chicks are getting more and more bold. Four more weeks, and they’ll be joining the big girls in the coop.