I’ve been battling with deer for nearly five years and I’ve finally given up the idea of coexistence. From all the reading I’ve done, in areas of heavy deer pressure, exclusion is the only way to grow anything edible. So I’ve pulled back into a defensible perimeter. The gardens that were North of the Bradford pear tree have been dismantled and sown with clover (at least I can provide good butterfly and bee food). Although I had some success in these gardens, the deer eventually tore through the netting, and the gophers dug under the barrier. I know when to throw up my hands in defeat. The gardens will be reassembled elsewhere.

According to the literature, an eight foot fence or an angled fence will keep the deer out, but let’s face it, if really pressured they’ll jump 10 feet easily. I’ve settled on a 7.4 foot coated wire fence with two lines of electric fencing angled outward at the top. The material is on hand and we just got 0.6 inches of rain to soften the soil a bit for digging. The posts are ten feet tall and I’ll be putting a full height gate for entry on this side of the house. The fence will encompass both mature fruit trees on the East side of the house and the three remaining (original) gardens. 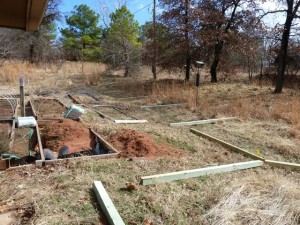 At least two of the disassembled gardens will be rebuilt in the back. Those and the five garden beds in the back will also be enclosed by the deer fence. 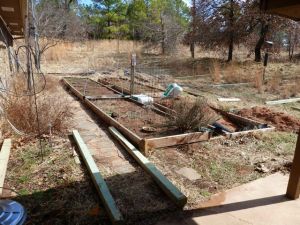 The small gate between the front and back yards in the current fence line will be removed and set here to open onto the stone pathway. The fence between the fruit trees will be removed to allow easy movement within the deer exclusion zone. The zone is big enough to allow for more fruit crop plantings and some lovely flowers and vines, as well as several more garden beds. But first, the fence must be built. It’s time for some good hard work!

We had a messy snow storm that started Monday evening into midday yesterday. The storm spread heavy snow all across the mid-West yesterday and into the East today. We were lucky. No freezing rain, but some interesting thunder sleet Monday night, then snow blowing snow and bitter winds. These cold temperatures might wreak havoc on some of my zone 7 plants, but maybe the thick layer of snow will protect them (there were some early daffodils pushing up before the storm hit). Peter’s been off work for two days now, but doing a bit from home. Melting won’t start until Friday at the earliest, but it’ll be above 40°F by the weekend.

Odo, also known as Arctic dog, shrugged off the cold and snow and was romping in the front yard. He didn’t do so well once he got ice balls building up between his pads, leading to a belly flop into the snow. I took him out later with his boots on and he trotted along like it was Springtime. He got bogged down in the deeper snow because he’s lost some back leg strength and tends to drag his feet a bit. Not a strategy that works in deep snow.

D’Argo on the other hand, is not a snow dog. I sent him out in the frigid cold and he immediately turned around and slammed into the door to get my attention. I had to bundle up and go out with him to make sure he did all his business. When I took them for a short walk later, he did pretty well as long as we kept moving. When his feet got ice bound he’d three-foot it for a while until I had the chance to grab him and scuff the snow out.

Peter took some video of me and the dogs outside.

My renovations haven’t entirely solved the pipe freezing problem, but only one sink tap has frozen, the other is still flowing. I’ll have to do some more weatherizing of the stack pipe in the attic when it warms up again. There’s little chance of pipes bursting with the new Pex piping, but I don’t like having the cold air leaking from the wall.