Now that the cool weather has arrived, we had a low push through yesterday that has dropped the highs into the 50s and 60s, I should catch you up on some critters I’ve seen this Fall. I’d been waiting on a book to identify the damselfly on the right, a Common Spreadwing. I found it clinging to a weed on the hillside while I was waiting on the geothermal installers to finish for the day.

Without knowing it’s common name, I call this the Halloween Jumping Spider. It was difficult to get a clear shot, as he was very aware of my presence and would zip around the back of the grass as I approached. I should point out that I have an unsophisticated non-SLR digital camera, and I have to get VERY close to take these pictures, or take them at a VERY high resolution and crop them down. This was one of those cropping cases, because it just wouldn’t let me get really close. 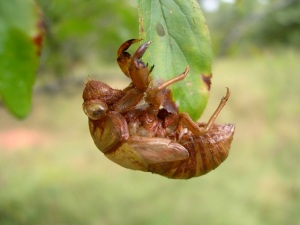 The last of the annual cicadas have emerged. This is the husk left over from the last instar (insect stage of development). Odo keeps trying to grab the adults. They’re awkward flyers and they make a lot of noise; very attractive to a dog with little hunting skill.

I found this Rough Green Snake on one of my morning walks around the block, just to let you know that we do have snakes here. The snake was about two feet long, but about as thick as my pinky finger. The Rough Green, as oppose to the Smooth Green, is more arboreal, and when I moved it off the road it slithered across the top of the foot high grass.

I don’t get to photograph many moths. They often don’t stay still long enough, but I caught this one feeding in my basil. It has the odd name of Hawaiian Beet Webworm Moth. It’s only around in the Fall and it’s larvae feed on plants in the beet family. Where the Hawaiian part comes in, I have no idea, since we’re towards the western edge of it’s range. 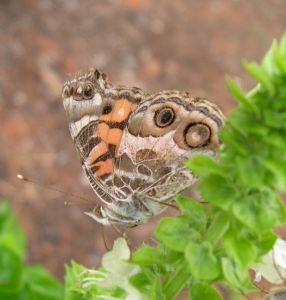 Another feeder on my basil plants, an American Lady. This is a migrant making a quick stop for a meal. A lot of the migrating butterflies were passing through just ahead of the strong cold front. They were mostly Monarchs but obviously not all. Sitting on the front porch I have watched numerous species stop for a quick pick me up at the local mud puddle.

One of which was this beauty. This is not a monarch, it’s a Viceroy. It’s a Monarch mimic. It was thought to only have deceptive coloration, but it may also contain noxious chemicals like the Monarch does. In our area it more closely resembles the Monarch Butterfly, but in Florida it mimics the Queen Butterfly (a relative of the monarch). I should be clear the Viceroy is not closely related to the Monarch. 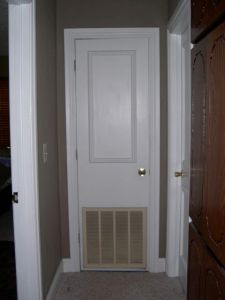 The last phase of the geothermal installation is finally complete, starting last Sunday to the finishing touches on Friday.

The first part was done by me on Sunday afternoon, starting with a pristine hall closet door. 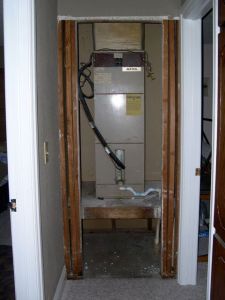 Which was ripped from the wall, along with the door frame and wall board. 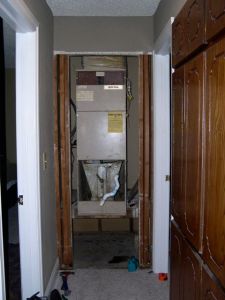 Out with the old, shelf and all! 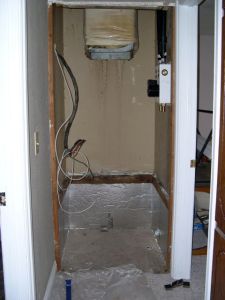 The first piece to be installed was the circulating pump (on the left hand side of the wall) which attaches to the ground loops. They also insulated below the old shelf, which apparently was essentially open to attic air. Now the closet is well sealed and will draw air from the house instead of the attic.

In with the new, all 350lbs of it! Then came the finicky parts. They’ve already installed the auxiliary heat coils above the blower, and now they’re installing all the pipe connections to the pump. As you can see the new one is quite a bit larger, so they didn’t have a lot of room to work.

Meanwhile outside, the pipes are connected to the pipe purger. Ten gallons of antifreeze is added to the big blue tank and enough water to top it off. Then the pump is started to circulate the fluid through the well, purge the air and top off the pipes.

The well loops are done separately from the furnace first. Then once he’s assured the pipes are purged, he added the furnace pipes into the loop and purged them as well.

Something’s missing here…Woo hoo, no air conditioner! It won’t stay that clean though. 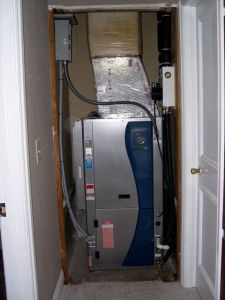 Most the day Tuesday was spent adding a sub-panel in the closet, wiring the furnace, building the conduit from the furnace to the original outflow pipe, installing the drain, installing the thermostat, and setting all the dip switches. Friday was just a touch up day, insulating the attic pipes and resecuring the pump to the wall, and that’s it! Simple as that! Seven full days over three weeks. The front lawn is still a mess but the water hasn’t receded yet to do the final landscaping. The closet door is on order and should arrive in a couple of weeks.

Now that it’s installed, we haven’t had to use it. The weather has been perfect, and we haven’t needed heating or cooling. We did test it of course and it was incredibly quiet. It’ll be even more quiet when we install the new door. 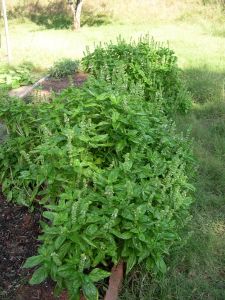 I’m sure most of you have tasted basil pesto or used basil as a flavorful seasoning to dishes. My basil plants were getting huge, starting to bloom, and were crowding my radishes, so I pulled a couple of plants out this week and made some pesto. ( It was very good).

I spent quite some time photographing these denizens and I’m presenting a sampling. There were two species of bees, one of which was a honey bee, a couple of species of wasps, grasshoppers, stinkbugs, several spiders, and of course the butterflies. I recorded 4 new species of butterfly for Windhaven, including this Southern Broken-Dash.

Another new species was the Common Checkered-Skipper. There were dozens of Skippers which take some practice to identify. Most of them were Sachem, but a few others were mixed in… 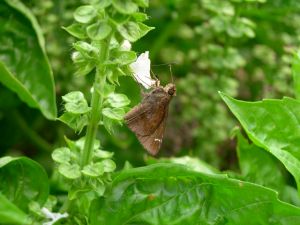 …such as the Clouded Skipper,….

…the Euphala Skipper (another new species),… 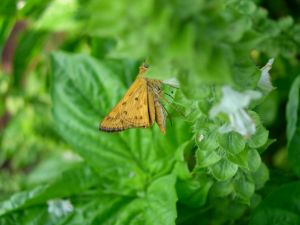 …and the Fiery Skipper.

A Cloudless Sulphur was visiting the flowers, a big bright yellow butterfly. 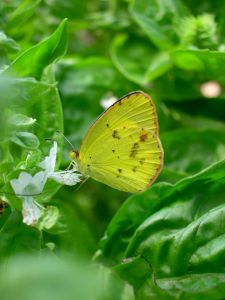 A smaller sulphur butterfly, and the last new species for the day, is the Little Yellow. I discovered that taking digital photos of everything different I saw among the basil flowers is the best way to find new species. I thought this butterfly was a Clouded Sulphur, until I compared the photo to the ones in the field guide.

Gray Hairstreaks (left) dotted the plants along with dozens of Eastern-tailed Blues. 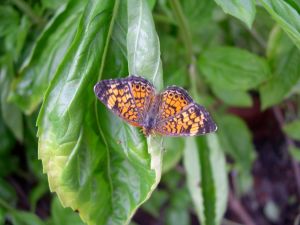 The last new butterfly photo for the day is the Pearl Crescent. One of several crescents in our area, and another one that’s easier to identify by photograph.

But there weren’t just butterflies in the basil. Most of the other insects were moving too fast to photograph, busy collecting nectar and pollen, but this small longhorn beetle stayed still long enough.

Jim helped me identify this spider. I had never seen anything like it before. This is a female Lynx Spider guarding her egg case. The brown spiky structure is the egg case, the spider is clinging to the bottom of it facing left (click on the image to enlarge it; it’s worthwhile seeing blown up). That’s one scary looking spider with all her spikes.

All these creatures were photographed in my small patch of basil, a veritable micro-metropolis of insect life. I’ve always been an observer of nature, always looking under rocks, but even I was blown away by the incredible biological diversity in such a small area.

I’ve been wanting to find a permanent location for the sun oven, but wasn’t sure where the best location would be. Ideally I wanted to be able to cook roughly between 10AM and 3 or 4 PM all year, but because the sun’s path changes seasonally and we do have trees around the house, a good spot now may not be a good spot in December. The other criteria was that I wanted it near the kitchen.

The Pathfinder is quite a simple, elegant tool. It consist of a base (not seen in the photograph), the instrument section, and a convex dome. 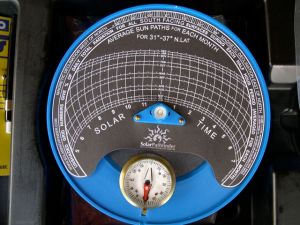 The instrument portion of the solar pathfinder has a compass to align towards magnetic South, a bubble level, and the average sun path graph for a band of latitudes. In our case we’re at 35 degrees North. The graph is twisted a little compared to the compass, that’s the declination adjustment to true South (only 5 degrees for us). When the dome placed on top, everything that would cast a shadow throughout the year is reflected onto the graph. 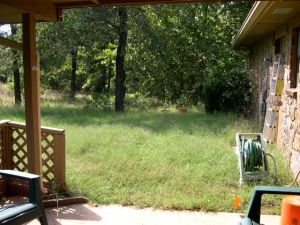 The first site I looked at for the solar oven placement was where I am hoping to build my outdoor kitchen. Logically this would be the ideal place for the sun oven, right outside the eventual mudroom door, or to the right of the back patio. From the sun path graph this turns out to be a poor site, since half the year the oven would be shaded by the pecan tree during peak cooking hours, and that’s if the tree doesn’t grow! (Look at the image reflected in the dome. You can see trees directly to the South and West, I’m hanging over the center taking this picture, and Peter is behind me turned towards the West). It’s a fine location for the middle of summer but not so good for early fall. Further North this wouldn’t be a problem, but here we’re still in the cooling season.

The second site is directly out the front door, not viable at the moment because of the mud puddle, but a very good location according to the solar site analysis. I could cook from 8AM until 4 PM almost every day of the year. It’s not too far from the kitchen either. There are two big drawbacks. One is that it’s right out the front door, and although it’s not too pretty now, it’s usually a lovely view and a permanent pedestal would detract from the view. The other problem is that the solar oven reflectors would shine blinding light back through the front door and windows, especially in winter when the sun angle is low. 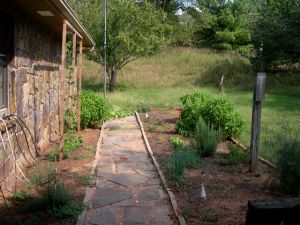 The third location is actually where I’ve been doing most of my cooking up to now, usually setting the oven on the path, which does make it a little awkward to access without stepping in the garden. The solar site analysis looks quite good, no shading during the prime cooking months, late afternoon shading from the pecan tree in winter and late autumn, and some shading in winter from the oak trees to the South. Of course in Winter, there would be few leaves so the solar radiation is only reduced by half instead of completely. Winter is also the season where I’m more likely to cook indoors, since we’re heating anyway.

Of all three sites, I think the third is the best compromise, plenty of cooking time for most of the year, close to the kitchen, the reflectors will face away from the house, and it’s tucked out of the way. I will have to sacrifice some garden space to properly access the oven and keep it off the path, but I already have plans to move the bulk of the vegetable production to the front yard, and the back garden would be devoted to herbs and salad greens. With that decision made the next step is to get a solar powered turntable for the oven and build the stand, but that’s for another posting.