Last weekend I installed the toilet in the newly renovated bathroom (some assembly required). It took me until Wednesday morning at 11 AM to finish all the details: hanging the towel bars, tissue holder and curtain rod (which required a diamond drill bit), buying the accessories, framing prints for the wall, installing all the new faucets and bathtub trim, painting the door and door trim. But, it’s done! We now have a functional guest bathroom and I finished it just in time for the unveiling at our Solstice housewarming party. So here it is! 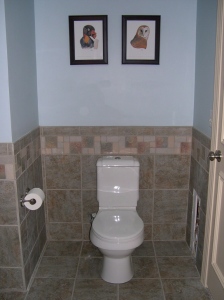 First, the toilet alcove. The original toilet was tucked into the alcove, with the tank up against the hall wall, or the right hand side of photo where exposed pipes can still be seen. We had the toilet drain moved so that the toilet could be turned 90 degrees and moved away from the walls. We installed a new Sterling dual flush toilet, to save water. The exposed pipes, which actually jut from the wall, will be hidden by a built in magazine rack (I still have to design that). The door used to open to the right, now it opens to the left. The prints I’ve had on hand for years but never had any place to hang them. As it turns out their colors complement the bathroom colors beautifully, so I framed them in simple frames, similar to that of the mirror. I had to drill through the tile again to install the tissue holder and my new diamond drill bit performed perfectly.

Next, the sink and vanity. The mirror on the wall is a remnant of the four mirrors that previously covered the walls. I had a professional remove the mirrors and cut a piece to fit the frame I had purchased. The sconces are new, replacing an ugly brass vanity light. The original light hung from a soffit over the vanity, but my new reciprocal saw took care of that. I kept the original sink but installed it with a new faucet into a new vanity. The vanity base was bought at a builder’s supply store. I cut off the the kickboard, installed new supports and attached the new feet. I made the vanity top using three pieces if red oak, a fun day when I used my planer, jointer, circular saw, jigsaw, hand drill, router and palm sander.

Finally, the tub and shower. We had to have the water pipes moved from other side of the bathroom (beacause they ran under the jacuzzi tub along the floor) and a new shower pipe installed. I built a new wall to frame the tub, beyond that wall will be a linen closet (it hasn’t arrived yet).

The curtain rod is curved, allowing more space in the shower (again I had to use the diamond drill bit to install it). I had the shower head installed at 6′ 8″ instead of the standard 6′ to accomodate tall visitors and the addition of the shower diverter for Odo’s bath sprayer. The photo below shows the chair rail tiles in detail, which were my inspiration for the whole bathroom. 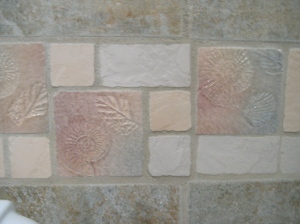 So there you have it, on time and under budget! With a functional guest bathroom, we can now take reservations from any friends and family who want visit. Operators are standing by!

Tuesday night it rained … and rained, and rained. Apparently only about 2.5″ but it left some interesting effects. The first thing I noticed was a pothole in the driveway. A gopher tunnel that went under the driveway had filled with runoff and undercut the driveway creating mini sinkholes.

The second thing we noticed when I was showing Peter the sinkhole, was the water in the pond! It’s only a few inches deep, and rust red, but still there after three days. That’s where all the water and part of the driveway went after traveling through the gopher tunnel. 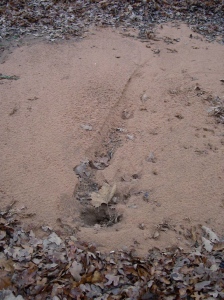 I found another gopher hole at the west side of the property, near our shed. The rain runoff must have rushed through the tunnels down the slope and, taking the easiest path gushed UP a hole at the bottom of the hill. Creating this strange wash of pure sand about six feet in diameter. I can only imagine what the gophers were doing. I didn’t find any drowned gophers, so they must have surfaced uphill or taken refuge in side tunnels out of the path of the torrent. Within a day I was finding new gopher mounds.

Our adorable gopher hunter is getting frustrated (seen here with red mud on his nose and chin). He would love to spend the whole day outside digging for gophers and chasing squirrels, but unfortunately I sometimes have to go to town and he has a habit of wandering off following some scent so I have to keep him tied when I can’t watch him.

The other day I had been busy all morning and hadn’t let Odo out. Around noon, I discovered I had to go to town for something, so I let Odo out to releive himself before I left. When I called him in after just a few minutes outside, he stared at me (like I was nuts) then with some extra coaxing, reluctantly returned to the house.

When I got home I put him out on his long line, then went inside. As I walked down the hall

way to our bedroom (and the only functional washroom at the time), I found a surprise in the middle of the floor outside the guest bathroom. Odo had gone into the guest bathroom, where I was still trying to clean tile, removed three sponges and an old toothbrush and chewed them up in the hallway. When I called Odo in and pointed at the mess, he stared at the hallway wall. Some people would call that spite but animal behaviorists call it frustration induced displaced aggression. I can only guess what happened, but I would imagine that while I was gone, Odo saw gopher activity out the front window (or deer, or a cat that he couldn’t chase), and in his frustration took out his aggression on an inanimate object. I don’t know what made him decide to pick sponges from the bathroom, I’m just glad he didn’t swallow too much of it. I think fencing has just moved higher on our list of priorities in order to keep our pup happy.

The radio room is mostly done. There is one other antenna I’d like to get up in the air, but that will wait for the next warm spell. Got the grounds all tied together Sunday (forgot to take a pic of that!) and got the 2m loop up in the air. If you’re really interested, here’s a description of the station.

Here’s the overall view of the operating position. The GMD-6D was surplus from a Local Government Agency. It could use a little work, but more than suits the purpose. Jeanette built the shelves many years ago.

And here’s the pass-through that Jeanette made for me to keep the winter out. I’ll try to get a picture of the outside of this so you can see the surge protectors. You can just make out the power bar (that I got surplus from CME) under the windowsill. It’s plugged into a new circuit to the left of the desk.